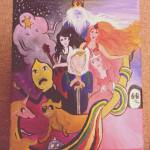 A poem I wrote from the imagined perspective of an immortal being.

A Half of Right

Is it an awakening to another delight?

When all is moving and all is fight,

There is but half, a half of right.

Time, you have told me

that memories pass and friendships fade

In crests of waves, yet…

And undecided between Expectation and Fate,

My devil thirsts upon my hidden Hate.

There is but one grain in this forsaken sand.

You, my devil, my friend and I

Should fight against this heated lie!

I am trapped. Endless motion, with so much emotion.

When all is moving and all is fight,

There is but half, a half of right.

In a world where prime-time television is dominated by a ‘reality’ as false as the eyelashes worn by the girls of Geordie Shore, and where friends will sit next to each other checking in on Facebook rather than having face-to-face conversations, it is no surprise that we are living in an increasingly narcissistic society.  It is perhaps not the internet which has created this obsession with self-image, for the human race has always been somewhat obsessed with it (think back to the Romans – one dude named Narcissus actually fell in love with his own reflection), yet the internet does provide a platform for us to be so, allowing us to be increasingly more preoccupied with broadcasting ourselves. I will happily admit that I use Facebook and I recognize that by telling you the negative effects of social media, despite the fact that I use it myself, is hugely hypocritical and is the embodiment of a central paradox. Yet, this doesn’t stop me from being disturbed by how many of us are increasingly becoming isolated by the very thing in which we use to supposedly ‘connect’ with others.

My inspiration for this blog post arose when I was in Rome recently with a friend; my phone had broken and therefore, I was able to appreciate the magnificent sight of the Fountain di trevi without the distraction of feeling the need to post a photo of it to my Instagram. What struck me was how there was not a single person who didn’t have their phone out in order to take a ‘selfie’. It made me see for the first time, how social media has had a dark effect upon society.

The way people present themselves on Facebook, often mirrors how they view themselves in real life. The fact that we are able to filter anything that we may perceive as bad/unflattering about ourselves on these sites encourages us to be overly self-aware, leading to a sense of inadequacy when comparing the lives of others. Young people are perhaps the most vulnerable to these misleading comparisons; 1 in 5 teenagers who regularly engage in social networking develop symptoms suggestive of clinical depression. Arguably, this focus on documenting often inane life events can be self-destructive as it can lead to cyber-bullying, a loss of privacy and inner self.

Facebook claims that their aim is to “give people the power to share and make the world more open and connected” but I can’t help but think that society is growing further apart and more isolated as we retreat from real social interaction and into the virtual world of social networking. We have been promised more human connection, but it looks as though we are more isolated than we have ever been. We are virtually closer to each other than ever before, yet more distant emotionally and mentally than has ever been seen in human history. With an average of 130 friends for each Facebook user, we are given a false sense of connection. Even if we are physically together, we still yearn to be connected to as many people and virtual places as possible, conveying how virtual interaction is becoming the preferred choice of communication. We are growing accustomed to a new way of being alone together as we meet up with friends but will spend half of the time on our phones. What is an even worrying prospect is the possibility that we are becoming afraid of solitude: have you ever been waiting for your friend to arrive in a coffee shop and you automatically get out your phone because you feel awkward or anxious to remain connected to your virtual world? This is a light-hearted example but my argument still stands: we easily slip into thinking that, by always being connected to others, it is going to make us feel less alone or that our voice is being heard yet we are at risk because it’s the opposite that is true. If we are unable to be alone, we are only going to become lonelier. This illusion of companionship in which technological devices seem to provide, makes us feel connected in ways we can comfortably control. However, do we want our children to grow up in a world where virtual interaction is the dominant reality, making their ability to engage in real social interaction stunted?

I am not suggesting that we should turn away from technology entirely and I recognise that the web is the social culture of the 21st century, but that doesn’t mean that we should accept it unthinkingly

n. the realization that each random passerby is living a life as vivid and complex as your own—populated with their own ambitions, friends, routines, worries and inherited craziness—an epic story that continues invisibly around you like an anthill sprawling deep underground, with elaborate passageways to thousands of other lives that you’ll never know existed, in which you might appear only once”

This fascinating word, coined by author John Kohenig has inspired me to share and muse upon the concept of sonder….

Imagine that every human being is like a character; the protagonist in the center of their own unraveling story. Your friends and family are your supporting cast whilst acquaintances are merely the transient, minor characters who act as catalysts to your own story of complex twists and turns. And the passersby or the strangers who casually walk past you on the street are the extras. You are the center of your solar system, the burning sun at the core of the universe, surrounded by its orbiting planets. Yet, each planet or ‘extra’ also has a life as vivid and complex as your own.  As you pass a stranger on the street do you ever wonder if he or she is content with the life they have been given? Does the stranger have the same regrets, hopes, dreams, drives and worries as you? Each and every one of us come to be an extra in someone else’s life story (which we may never learn of) because at some point in our life, we may be that person who coughs quietly on a train or the person who sits reading in a cafe, unnoticed by the world around them. Perhaps consumed by the intricacies of our own web of life, each character plays a significant role: together in one continuous flow of complex expression, we convey exactly what it means to be a human in the most beautiful way possible.

My love for you is an Amaranth

Yet plucked from the stem

Its spirit once resplendent

Has now faded and begun to die.

My Amaranth, once fed by

The rich streams of nectar flow.

Pure, loving river, you are no more

as it stands in the unmerciful cold,

cursed by its imperishable immortality,

it dutifully awaits the merciful spring that will never